In recent years, a new class of cell molecules called micro-RNA (miRNAs) has been discovered, which play an important role in cancer development by influencing the production of certain proteins.

Protein synthesis in the cells starts with the conversion of the DNA into an mRNA copy, which serves as a template for the order in which amino acids are joined together to form the protein. MiRNAs are short RNA fragments that can stick to a specific mRNA and thus block protein production.

Researchers from the EB House have recently identified that the miRNA named miR-10b might be implicated in the development of aggressive squamous cell carcinoma (SCC) in RDEB patients. SCC skin cancer is the leading cause of death in patients suffering from the severe form of RDEB. Up until now, researchers have been unable to fully identify the cause of the highly aggressive behavior of RDEB SCC compared to the SCC in the non-EB population.

In laboratory experiments, the scientists compared SCC cells and SCC skin with healthy samples to determine variations in the quantities of different miRNAs. All SCC samples showed an increased amount of miR-10b. It has already been described that miR-10b blocks an mRNA in tumor cells that produces a protein important for prevention of tumor development.
In the present study, the researchers were able to confirm that miR-10b induces cancer-associated properties in RDEB skin cells. They observed that skin cells producing a high quantity of miR-10b suddenly change their growth behavior and form cell aggregates. This characteristic is related to tumor spread and the formation of metastases.

Since no approved or effective SCC therapies have been available to RDEB patients so far, the results of the latest study from the EB House provide new hope. The targeted reduction of miR-10b in tumor cells could contribute to SCC prevention and treatment. 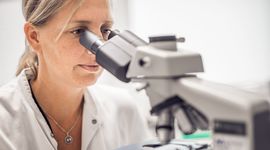 This group is working on the development of functional, therapeutically-relevant small molecules, which may help to alleviate severe symptoms in EB patients.