New scientific article on research from the EB House

RNA trans-splicing not only represents a promising method to correct gene mutations, but can also potentially be used to treat solid tumors. In 2013, a Japanese research team focusing on colon cancer became interested in a trans-splicing-mediated cancer suicide approach previously published and developed by EB House researchers. Since then, a successful collaboration has developed between the two groups, with scientists on both continents investigating and further developing the application of this method for tumor treatment. The result of this collaborative effort has recently been published in the scientific journal Cancer Letters.

For cancer suicide therapy, the trans-splicing method is used to produce a toxin specifically in cancer cells that drives them into suicide. To achieve this tumor-specificity, an RNA-targeting molecule (RTM) was developed that binds to a tumor marker message that is present only in cancer cells and not in healthy cells. This RTM facilitates the re-programming of the message resulting in the subsequent expression of the "suicide gene", herpesvirus thymidine kinase, only in the cancer cells without affecting normal cells. The cancer cells can then be killed by treatment with the drug ganciclovir, which becomes converted into a toxin only in the presence of the suicide gene. The researchers tested the approach by introducing a suicide-RTM that targets the Ct-OATP1B3* RNA into cultivated human colon cancer cells. Upon addition of ganciclovir to the cell culture dish the majority of cancer cells died.

The results of these experiments demonstrate the potential of this approach for the treatment of solid tumors. However, further research is required before an application in humans can be considered safe.

* see article "New diagnostic method for the early detection of cancer in RDEB by liquid biopsy?" 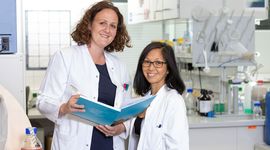 The ever-present threat of skin cancer: How do wounds develop into life-threatening tumours? This group is working on the development of new and effective forms of treatment.